Menu
Log in
Register
Install the app
You are using an out of date browser. It may not display this or other websites correctly.
You should upgrade or use an alternative browser.

OK, maybe this isn't really a new obsession- I get this way every year when I start getting serious about my calves. I do have a confession to make though- I love those furry hairballs! No, calm down- I want them structurally correct, but I love to see how some people can make hair grow on anything.

I work on mine but I don't have a cool room so I'm at a disadvantage. I keep telling Ohio B, he's going to find an extra heifer in his!

Would love to hear any good tips on growing nice hair. I know genetics play a big factor in it & several have the right genetics for amazing hair. My goal is to have them ready for Louisville in November.

If you only do one thing besides brushing, you HAVE to rinse them at night before you go to bed.

I'm brushing so much & blowing that my carpal tunnel is starting up again. Have to wear the wrist thing at night when I go to bed or my hand is numb.
I rinsh twice a day & mist about 2-3 times in between. I'm putting them out later at night so the sun isn't has strong.
Humm.. wonder if Rogaine works for cattle?  (lol) Anyone have any luck w/ Grow & Shine or something like that?

i was wondering about the shag stuff... O0 I want one with a fro to put a pick in his hair

I have heard good things from people using Shag but i have not tried it yet. We just do the fans, misters, rinsing, brushing, and more brushing thing.

We don't have a calf cooler and I have not found a need for one yet. (except for developing pneumonia)

i'm a little confused on the hair thing.  as a returning novice, it seems some people just cut a lot of the hair off, so it it more important to have the right type of hair, and if you don't have enough of it, train the other stuff that is there?  what is the average length of some of the longer haired animals after it's cut?  what length is cut off, where is most of the longer hair?

Knabe- I like to have enough hair to be able to work w/ it. It's good to be able to have hair in places that the animal needs it in & less in the shoulder area. We usually trim their heads, neck & shoulder areas about a week before the show. At the show we'll pull the legs & even up the job all around. A lot depends on the calf. Some just look better w/ more hair that others. Same thing goes w/ the breed & area. It seems that for shows like Louisville, you look better w/ more hair.
does this make sense?

We usually clip the heads, necks, and tails every week, this keeps the calves cooler. We rough out (body clip) every 2 weeks to keep the hair fresh. This past Spring we clipped our Red heifer down to about 1/2 inch of hair and then began working it to get it going for the jr nationals. By clipping a lot you keep the dead hair out and create fuller/fresher growth

yeah,  in college, we used to flatten off the shoulder, and if they were real dippy in front, just blend it in real good, and behind the shoulder too.  i was always confused why you wouldn't want to sculpt them so they looked fat, instead of just making their top flat. obviously you want some spring to the rib, and to take away some of the roundness of the belly and make them look thick front to back.  to me, the most interesting clip jobs are around the stifle area that seem to make them more posty instead of less posty.  also of interest, is the view from the rear between the legs, to see the cod in steers, or just general thickness in heifers.  to me, in heifers, i would want to have it clean so the judge could see they weren't fat, but that's another story..  it seems the clip jobs want to emphasize how clean they are, but they need to have fat on them.  as was mentioned, they have pone fat, but this area is clipped so you can't see that.  the brisket is cleaned up, i like that, as well as sweating the necks, throatlatch, although again, if they are fat, they should be fat.  thinking here about if that were in a human, they would have a duck neck with a big ol fat body, which is pretty much impossible.

perhaps some could comment on what a stale steer is.
P

if we really want to grow hair

and try to keep it as darl and cool, as possible
P

by the way it is a great obsession to have. i wish i had it more often. so all my calvles would look like this 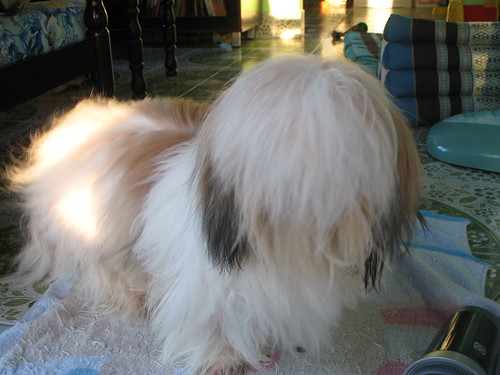 lets try breeding a little highlander in shall we
P

This will definately stir the pot and cause some nightmares and probably catch me alot of grief, but here I go anyway breed to a THC and or PHAC bull.  The hair will come and Barrellracer will like the job security when seeing your purple top tubes arriving in the mail.  Think about those tax deductions at the end of the year when you write off the cost of testing them.  Also its August now, and cattle start growing hair in August ( for all you doubters take notice of the cattle in your barn and even those in the pasture about this time of year and you will see a increase in hair growth ) every year so it won't be long til they are hairy.

AFHM- actually I see no difference in the hair between my heifers out of a carrier bull than a non-carrier. I do think genetics play a huge role in it.

Thanks Chambero for the suggestion. I've read previous posts about the stuff & think it's something I want to stand clear of!

I'll just keep playing w/ them & hope for cooler weather. That should help more than anything.

farmboy said:
lets try breeding a little highlander in shall we
Click to expand...

how's about 12% to 30% galloway....now theres some hair, and some mass to go with it...waiting to see how my friends turn out this spring...he added it to some of his maine/angus mix....jbarl

actually one or two of the club calf bulls do have a little Galloway mixed in them.

I rinshed & blew them out this morning. They're under fans tied up now. I usually have pretty good luck w/ hair but always want MORE!!!

i know barrelracer can defend herself, but, this is not about job security.  the test basically covers costs, including overhead of probably about 30% which must be paid by the grantee to  the university to cover things like overhead including electricity, maintenance on the building, maintenance costs on the machinery, health benefits, etc etc.  the lab is not getting rich.  they could have VERY easily just sold the test to a company and let them decide a price, perhaps even doing it as a package deal for some of the other genetics testing.  granted, it does allow some financial benefit to the lab, but they are definately writing grants to stay viable.  job security for student members of the lab is not a real concern as most go on to industry or some other road.  the percentage of people working as a non-student employees in smaller labs is not that high.  as someone who has worked both sides of the coin in the genomics field, both for private industry and at a university setting, both have their advantages and disadvantages.  a professor ususally has about 7 years to get tenure, which is granted on a few things including the ability to write and attract grants, as well as teach, graduate students at a decent clip.

tax deductions.  i'm against most tax deductions, including the ones for property tax and interest on homes, the child tax credit beyond 2 kids, special deductions for big boxes in commercial zones, stock grants, etc.  the american public has no idea how markets work.  with deductions removed, prices go down, as they are out of balance when not supported, and if a product doesn't cover costs, it goes up.  there should be means testing on a graded scale for the deductions that are left, such as social security beyond a certain income, starting at say $75,000, where beyond that the scale you get goes down rapidly.  same with farm subsidies.  we should be supporting a distributed economy, and not concentrating it with fictititous claims of efficiencies.
You must log in or register to reply here.